Paris, Talk about it..., Tips, Travel

I have this condition called, “I was born in Florida where we have no style sense.” Flip-flips are everyday wear, in many cases for work and church too. Outside of those things, shorts and a t-shirt are really all you need. I also had a double whammy in that I went to a school with a uniform. Not just a dress code, but full on plaid skirt, knee-high stockings and penny loafers. Traveling with any sort of style while not packing three suitcases was definitely a challenge for me at first.

When I went to Paris in 2008, I was walking around in jeans, flip flops and a t-shirt (terrible I know). It got really chilly in the afternoon, so we stopped at a market and bought some scarves. 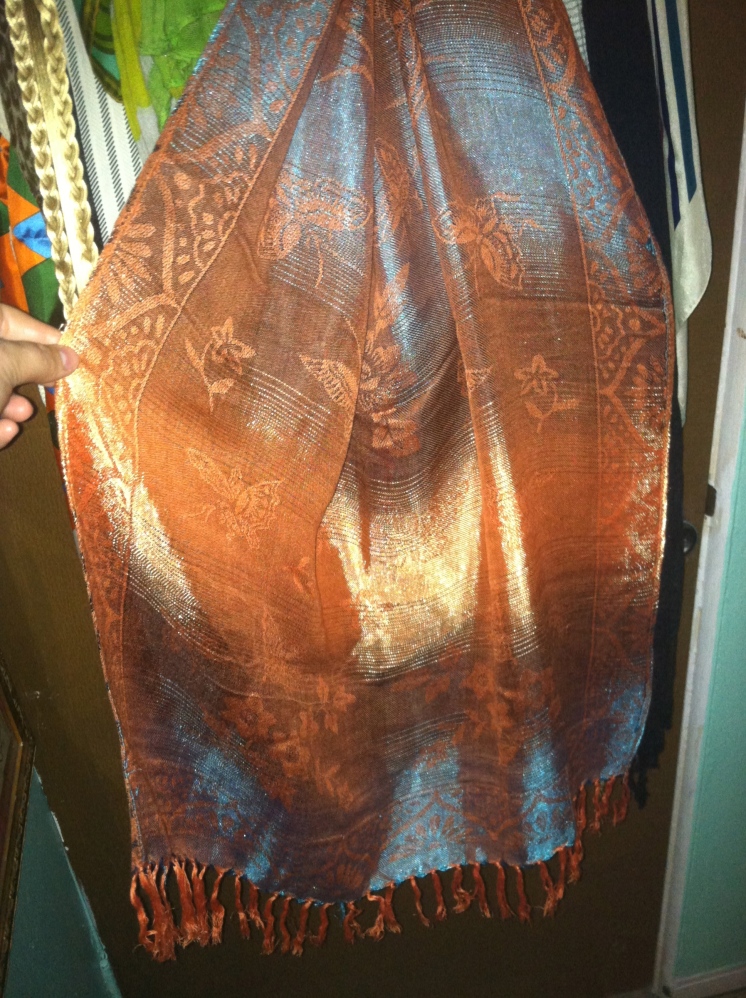 I got this baby. I think I thought “Oooh shiny! Pretty colors!” I still do really love this scarf, but this matches with very few things, it’s pretty obnoxious and orange really isn’t a good color for me…. which is why, like a terrible daughter, I stuck my mom with the gaudy orange scarf and took her wisely chosen, black and brown scarf… 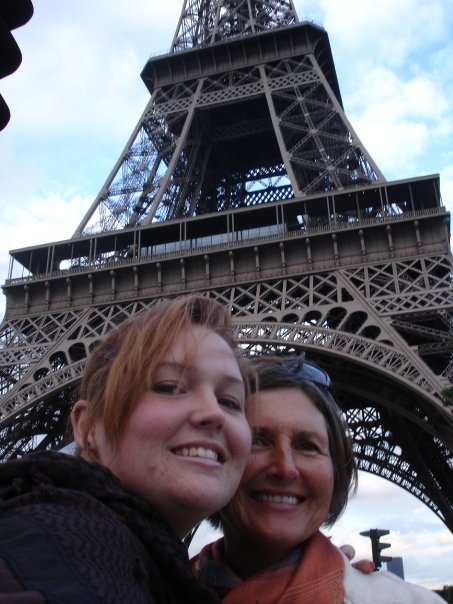 She’s so much better at this stuff than me! It matched with everything and it was really warm! 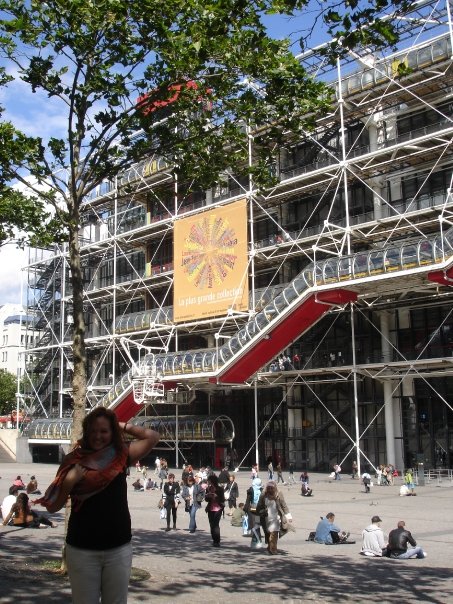 It started like this…. then the orange beast descended upon my mother… 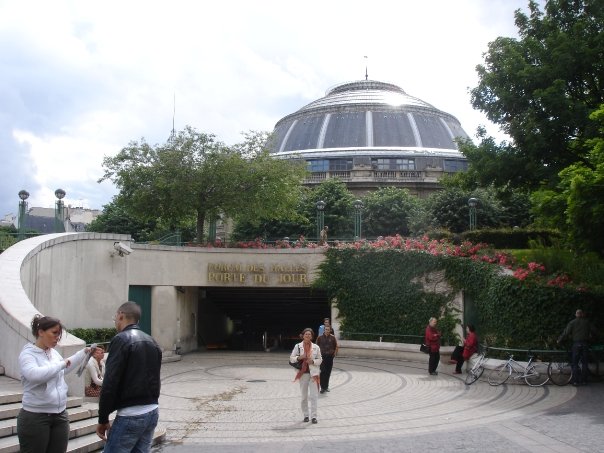 And I “borrowed” the black one for the rest of the trip.. 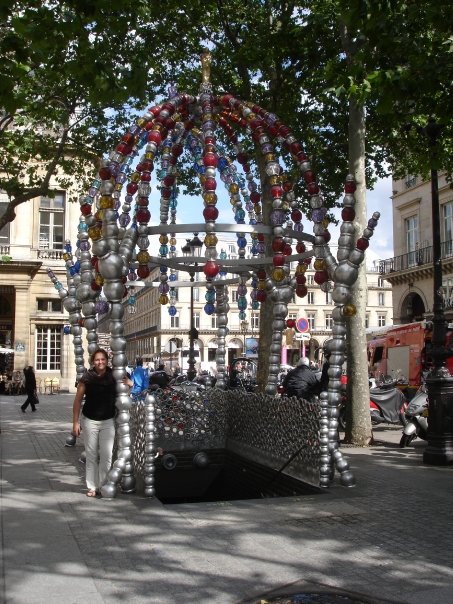 Much better right? Plus, how awesome is that subway entrance! Am I the only one with fashion slip ups? I’d love to hear your stories in the comments below!

I’ve already posted about zombie walking through Paris and our practice being vagrants, but we actually did much more than that! We did a lot of things that you would expect tourists to do, like visit the Louvre.

Pictures and words are not enough to describe this exquisite museum. We only had about 3 hours to spend, but we could have easily lost days in that place exploring and taking inappropriate pictures..

I blame it on residual effects of sleep depravity. We weren’t allowed to use the flash, so our picture quality wasn’t the best. Once you find the Mona Lisa, you’ll see that you have to squeeze through about 15 layers of people to get anywhere near it. If you don’t, you’ll end up with an awkward picture like mine where it looks like you photobombed yourself..

We also saw the Venus de Milo, but I can’t seem to find that picture.

This trip was just before the 2008 Presidential election, so anyone that found out you were American would yell “Obama!!” at you excitedly. There was a pair of Nigerian men getting signatures that were particularly excited about the election.

We couldn’t sign the petition because we weren’t French, so I’m not sure what it was about, but they were so charismatic and funny!

Transportation was outstanding. It was easy to navigate and if you purchased day passes you could take a bus or train about anywhere within city limits. We learned about the city limits part through trial and error. Towards the end of the day we were trying to see something just outside the city and when we got off at our stop, there was nothing there but a setting sun and some papers that were blowing eerily across floor. We decided to abort the mission until we discovered that our passes would let us back on the train platform. We actually had to climb through a gate and over a turnstile. There wasn’t even a ticket booth there, so we didn’t have any other option! Oh well.

So Apparently I’ve been to Paris…

My mom and I were going to the Netherlands to visit family, and we decided to tack on a trip in the beginning to Paris. Mom was coming from Costa Rica and I was coming from Florida. We managed to get flights that would meet up in New York, so we could do the last legs together. That sounds all well and good, except I had to leave Florida at 6 AM and then wait in JFK for 6 hours until she got there, then another 2 hours wait for the flight to Amsterdam and then connection to Paris. Needless to say, it was and long day and I maybe slept 1 hour the whole time. I am not one of those people that is blessed with the ability to sleep on planes. It was around 8AM when we arrived in Paris and we couldn’t check into the hotel until 1PM! Thankfully, we were allowed to drop our luggage there, so we at least didn’t have to walk around the city with them! You can see bags the size of the Boeing airplanes under our eyes in the pictures from that morning… 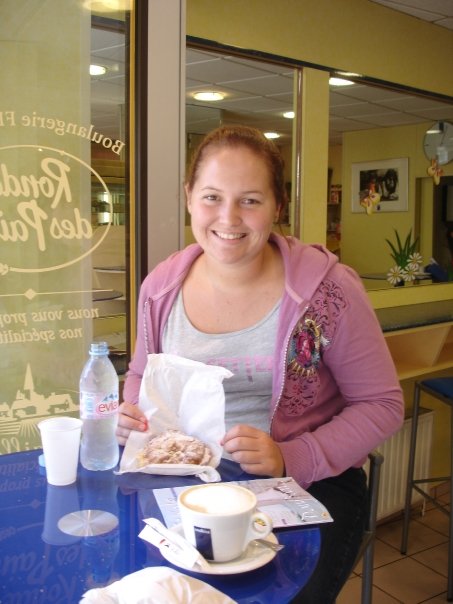 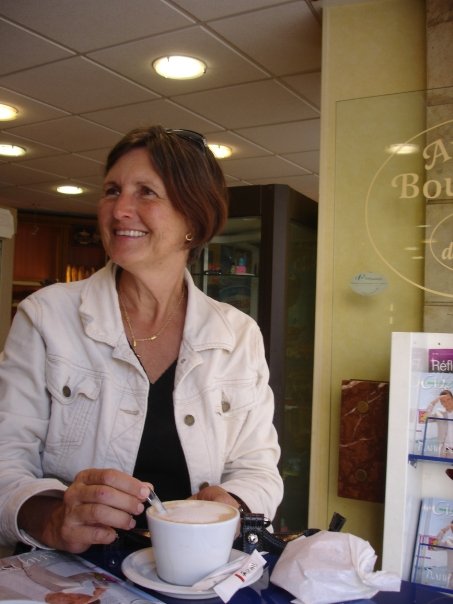 It was such a gorgeous day and we tried to enjoy it to the best of our abilities. After a few hours of dragging ourselves around, we saw a cute little park that was full of people sitting in the sun, having picnics. We found an empty bench and thought we would sit for just a few minutes… HA!… We. Passed. Out. In the middle of all the bustling activity of a gorgeous Parisian morning, there were two tourists, mouths agape, heads fallen backwards, probably drooling and oblivious to the world. After about 45 minutes we became conscious again (maybe the locals had made a game of hitting us with bread crumbs or something), had a good laugh and shrugged it off by saying we’d never see these people again. This pretty much sums up our first day, besides a marathon nap (actually in our hotel this time) and a nice dinner at a street cafe. There is much more to say about Paris, but that’s for another post 🙂