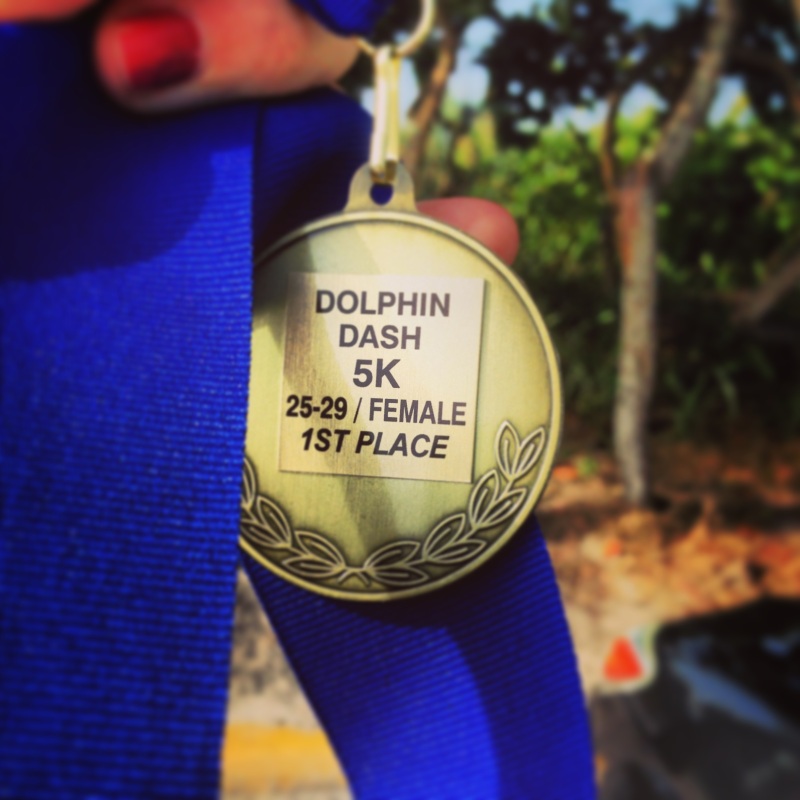 Somehow, I placed 1st for my category in a race I did over the weekend. I don’t know how it happened, I’m just excited that I got a medal.

The Dolphin Dash is a cute little race out on Anna Maria Island, with the proceeds going to the local elementary school. Around the halfway point, I ended up running next to a little girl who was by herself and seemed on the verge of giving up. She slowed down to a walk so I said, “Come on. You’re over halfway through. You can’t stop now!” And just like that, I had a new best friend. The second half of the race was spent talking about movies and music, instead of thinking about running and how much distance was left. It was a nice change. As hard as it is to talk while you’re running, it actually makes the time go by pretty quickly.

I learned two things from this race:

1) If you need a confidence boost, sign up for a small race. Even if your time isn’t any faster than normal, you might place, which is always fun.

2) If you’re considering saying something encouraging to someone, you should just go ahead and say it. You don’t know how much the person needs it, you might make a new best friend and, lastly, you might get an awesome finish line photo out of it. 🙂

So did anyone make any New Years resolutions? The Dolphin Dash was the start of mine. I’m hoping to run one 5k per month with the two friends who ran this race with me. They also placed! Great start for a resolution!

72 Days until the Music City Marathon